F295 is looking forward to having Caleb Charland as one of our 2015 featured speakers!

Charland is currently teaching at Bowdoin college, completed an artist residency with the Maine College of Art in 2013, and was a Trustee Fellow at the Art Institute of Chicago in 2010. His work blurs the line between the scientific and the artistic, bringing new life to the mundane and ordinary. We recently had the opportunity to speak with him  about the relationship between his work and the world around him.

F295: What was the path to finding your “resonance” with everyday objects?

Caleb Charland: I wouldn’t say it’s “my” resonance, but “a” resonance. Science and art begin in the mind, we gather knowledge and through a dedicated practice we see some new way forward by knowing where we’ve been. This resonance turns to harmony when all the factors involved are balanced in just the right way. I think of resonance as a potential or a glimmer of possibility. Something holds your attention and you start thinking of how to use the knowledge to make new work. Once you have an idea it’s very much like proposing a theory and then the fieldwork, the best part, begins. You have to work it out in the studio and find just the right combination of ideas, materials and process. The resonance is the potential and the harmony is the solution. 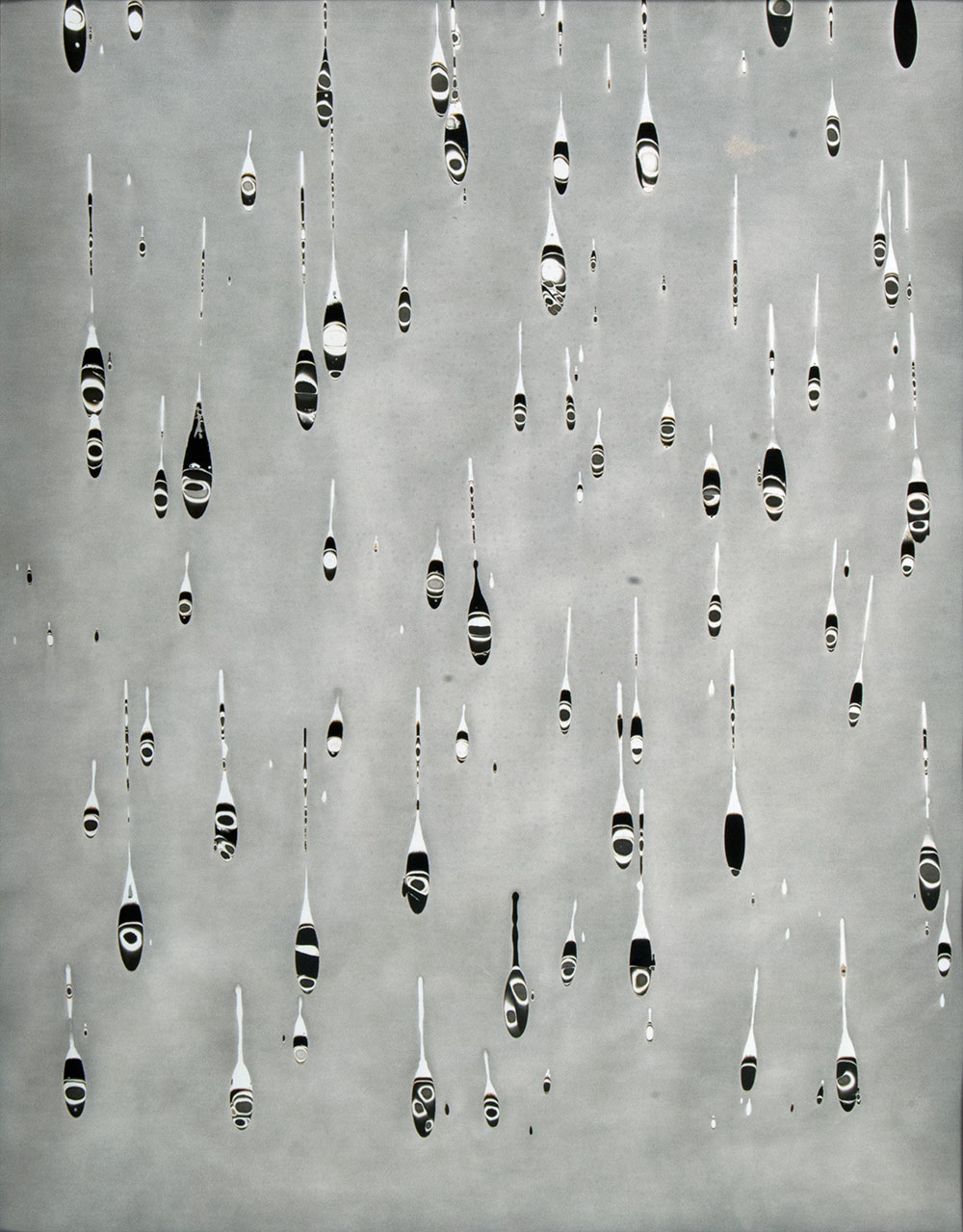 F295: To what degree has science inspired your work, for both current and past projects?

CC: It always has. I’ve been working with photographic materials since I was a kid. Learning analogue photography is a prolonged experiment. I’m still figuring it out all these years later. It’s a progression of variables, how to use the camera, chemically processing your film, printing it etc. Right away I learned there is a logic to it and you should only change one variable at a time to isolate your influence on the system. But even back then I knew you were supposed to question things and try new things out. The intentional change to the system is key. I was allowed a lot of freedom in my highschool’s photolab.

I was fortunate at that time, in the mid 90s, to have been turned on to Mike and Doug Starn’s work by my older brother who was studying painting at the time. I think what really got me were the indications of process. Ripped sheets of paper held together by tape, large sheets of film supported by pipe-clamps, and even the frames they made specific to the work. It told me there was a whole world beyond the straight print. That time of exploration is finally coming into its own with some of my most recent bodies of work. 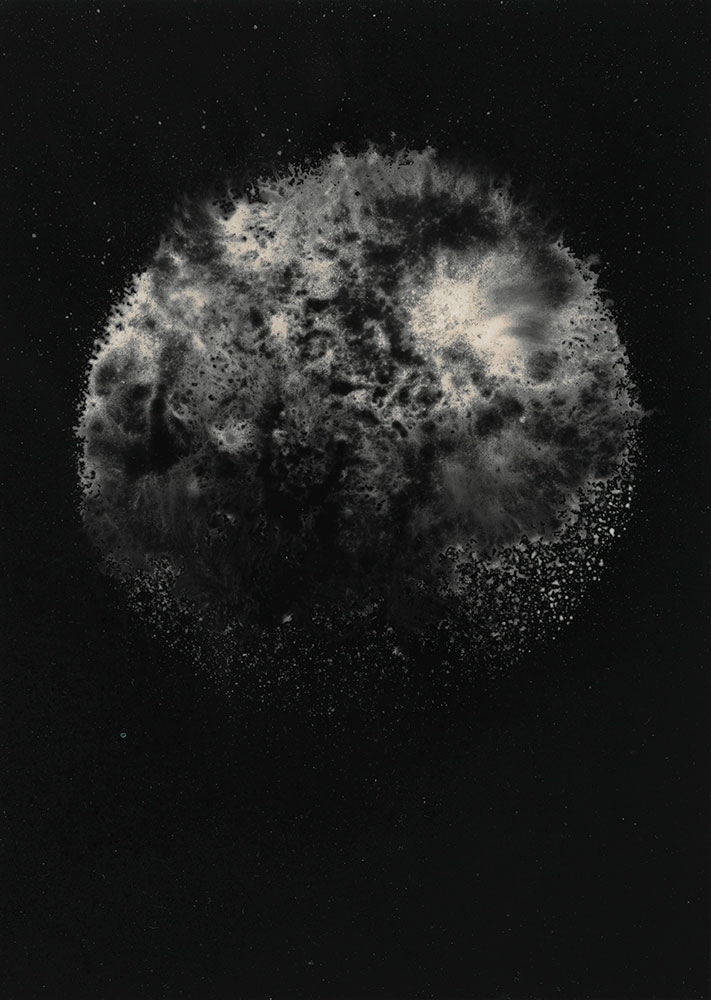 More specific to your question: Photography is so much about observation and when I hear scientists talk about their own work they sound like artists to me. One of my favorite episodes of RadioLab is on Emergence theory. They interview E.O. Wilson about his work discovering that ants communicate with pheromones. He had observed that as they move around something comes out of the stinger on their abdomens. After dissecting the abdomen he found a variety of glands. When he cleaned one in particular and smeared it out on a surface the ants were instantly drawn to it. This pheromone was laid down on the ground through the stinger creating a chemical map of the ant’s trail. This becomes a chemical highway leading directly to sources of food outside to colony.He would use this process and write his name in ants during lectures. Dissecting the abdomen must have been difficult given how small ants are. But he did it and his work has increased our understanding of the world. There is an absurdity to both art and science. We get an idea, we see a possibility, and are driven to figure out what it is and how it works.

F295: How does your use and interplay of process, technique, and materials influence the creation of your work?

CC: After the resonance is observed or sensed it’s time to see if and how it works, the process begins. Often one thing leads to the next, or circles back to something from years ago and moves forward. Perhaps I should run through some recent projects that have progressed from one to the next.

Back in late 2011 I wanted to find a way to get back into the darkroom, not just as a place to make prints, I wanted it to be the studio. Nothing really came to mind until I was preparing for a show “Artifacts and Particles” with my friend Peter Shellenberger. Our work stems from a similar desire for photographic possibilities, I was excited by the chance to show together. We wondered about collaborating to make new work for the show. We both swing between lens-based and cameraless work. Up to that point my cameraless work was made using a scanner. But I had collaborated with Joe Johnson and Chris Woodcock the summer before. We lived in three different areas of the country and using the exquisite corpse as a way to collaborate across great distances we would each shot 4 sheets of 4×5 then would mail it on to the next person until we had all intervened on each sheet. We never talked about what we shot and the results, the amazing collisions, were astounding. I suggested to Peter that we spend a few sessions in the darkroom and use the exquisite corpse as our framework. We’d each do something to a few sheets of silver gelatin paper, then hand it off to the other, not indicating what each had done. Again the results were fantastic and truly one-of-a-kind objects. They felt like meteorites, our interventions blended to where they seemed alien. The installation ended up being 50 or so 8×10 prints displayed on a grid of small shelves. This inverted the reproducible nature inherent to photography and made me acknowledge the print as an object, not just a window. I loved the idea that none of these could ever be printed again, no editions! It was relieving in a way. 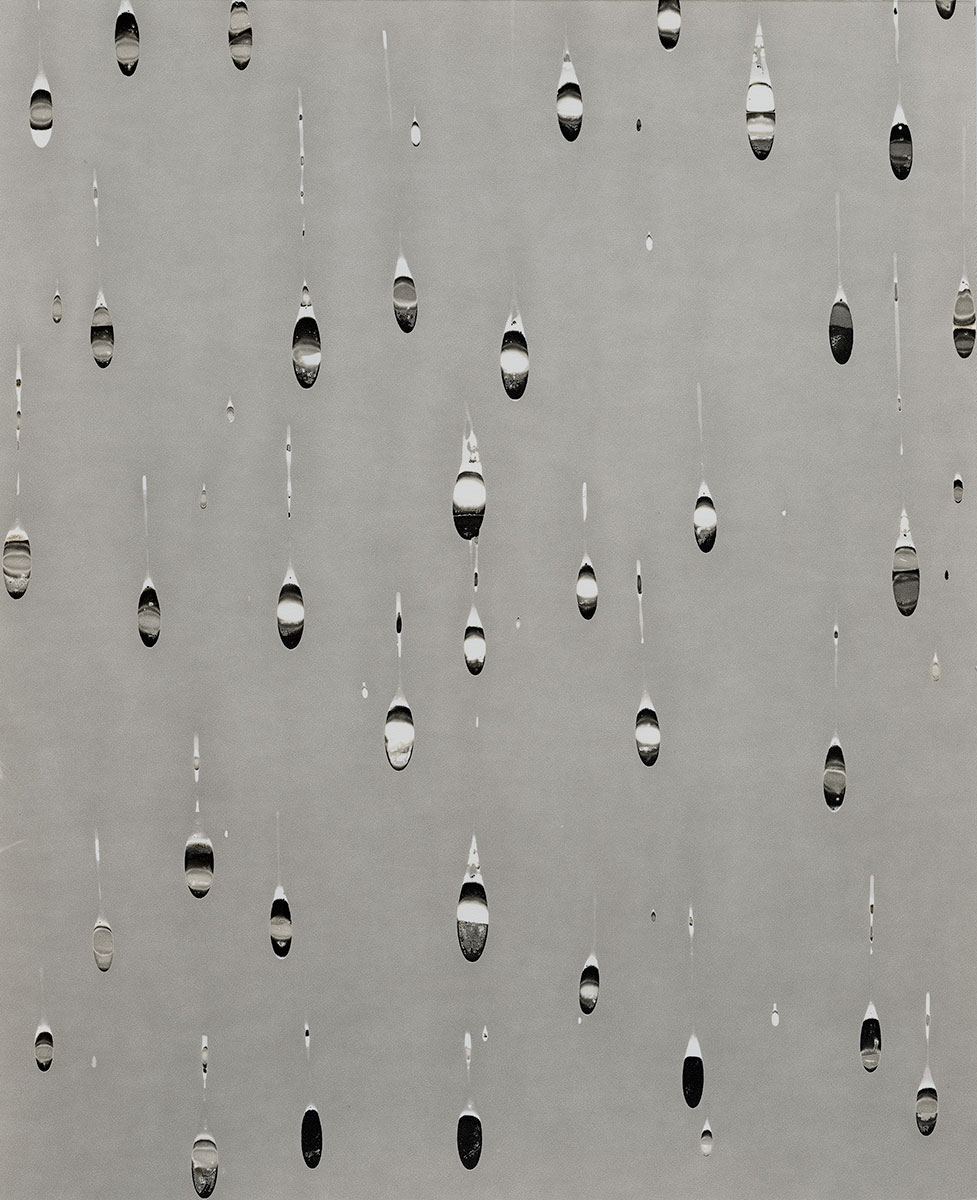 Soon after I remembered I heard that one of the earliest observations of the camera obscura resulted from seeing a candle project through a pinhole, perhaps in a lantern or a sheet of paper. I wondered what would happen if I limited my means of production to a candle and photo paper, a light source and a surface. Not knowing what would transpire I began exposing photo paper with a candle. Soon enough some wax fell onto the emulsion leaving splatters and a drips. When I processed the paper the wax acted as a resist to the chemical development. That seemed interesting to me .After processing the paper I wondered if that bit of emulsion under the wax would process if I removed the wax. Amazingly it did. The area of the paper that first developed had already been fixed so only the area under the wax would develop the second time. I jumped on this process and spent months perfecting and playing with the process. Eventually I began to exhibit more control and made a series of drips. By propping the paper upright the falling wax would catch the emulsion as it fell through the air, leaving tear drop shapes. The resulting images felt like a rainstorm of silver. This work is called “The Artifacts of Fire and Wax”

After making this a viable process I wondered about adding the other elements of photography into the process, time and motion. Years before I had made work using pendulums and was struck by the idea that a roughly 1 meter long pendulum will swing back and forth at one second intervals. Gravity’s clock if you will. Last spring, 2014, I built a pendulum in my studio and figured out how to attach a candle to it. As is swung back and forth over several sheets of photo paper the light of the flame exposed the paper while the candle deposited drops of wax horizontally across the sheets. Eventually the process would manifest in a long line representing the time and motion of the candle moving in time and space. I was enjoying this process more than any other I had ever engaged in before.

Since October of 2014 I have created a few more bodies of work the stem directly from The Artifacts of Fire and Wax. To get the Artifacts to work I had to adjust and play with the prescribed photo chemistry. I wondered if I could make work primarily with photographic chemistry. Immediately I thought of stop bath and science fair volcanoes made with baking soda and vinegar. Stop bath is basically vinegar.

These chemical reactions were made by flashing photo paper for a few seconds to charge the silver particles then, through a variety of processes, subjected to the interactions of baking soda and vinegar, as well as the other chemicals, developer and fixer. The circular nature of the images seemed logical. Akin to a petri dish or explosions. Oddly enough the circular nature of the images lead me right back to candles. Such a simple light source, such a simple process. The most recent works I’ve made, Penumbra, look like eclipses and solar flares. In reality they result from the shadows of the candles on silver gelatin paper. The utter simplicity continues to amaze me.

F295: How does the experimental nature of some of your work dictate your decision making process? In what ways does it shape your work?

CC: I think the previous answer speaks to this question. But in follow up to the first question about resonance, I wanted to mention something else. The idea of resonance becoming harmony when a balance is achieved also includes the desire of the one creating the balance. So an idea gets you thinking and experimenting, you might end up in leftfield form where you started but by being patient and observing objectively new things emerge. I think back on an older series of work “Demonstrations”, specifically images I made of nails suspended in magnetic fields. When I was planning the first image, sketching it out, I drew it up thinking the nails would be drawn to all surfaces of the magnet evenly. In reality there is a point where the magnetic field is strongest so all objects are pulled to that one spot. This is a case where the natural tendencies of the objects and my desires as an image maker come to an understanding and often make much more interesting images. 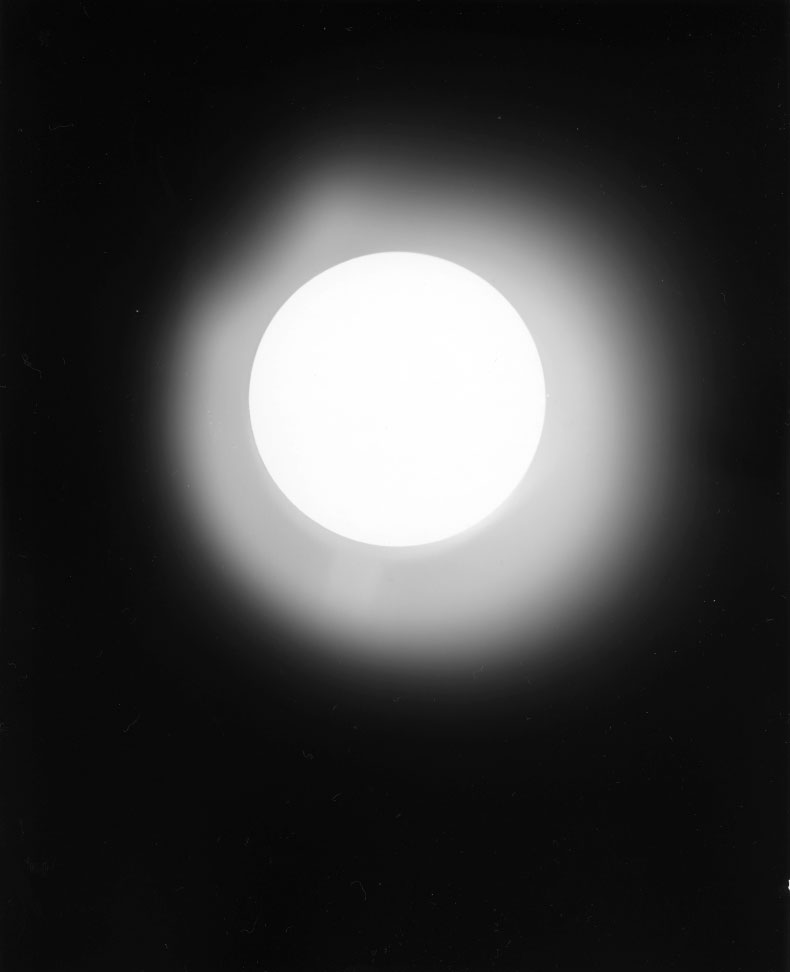 F295: What inspires you to turn the ordinary into something visually extraordinary?
CC: A musician friend said to me that when it comes to jazz simpler is better. I think when you’re fortunate to have found a process you enjoy, that yields work you’re happy with, it feels much more satisfying when it strikes at something basic or perhaps universal. Maybe it is that common things are common, easy to forget about, so when something new is shown about it, or with it, there is a bit more weight to the discovery.

You can read more about Charland’s lecture, From the Basement to the Backyard, here.